Egyptian documentation about history of SCI

Our knowledge of history of SCI (spinal cord injury) originates in ancient Egyptian society (Third Dynasty, 3000–2500 years BC). In 1862, the Egyptologist Edwin Smith purchased documents from this period describing different injuries to the human body. These documents are regarded as one of the world’s most valuable treasures of medical history. The documents, later named the Edwin Smith Papyrus, contain 48 cases of trauma including six cases of spine and/or SCI. The case reports do not differentiate between injuries to the spinal column and the spinal cord. Imhotep, an Egyptian official and architect responsible for the step pyramid of Sakkara and a practicing surgeon, probably wrote the papyrus. The documents are dated to approximately 2500 BC and clearly illustrate biomechanics, clinical evaluation and diagnosis, treatment, and prognosis following different injuries ranging in severity from mild distortions without neurological impairment to fractures leading to complete SCI.

The clinical status includes paralysis of both arms and legs (tetraplegia), loss of sensation below the level of injury, and loss of control of the urinary bladder. The patient also showed persistent involuntary painful erection (priapism) and ejaculation. The case report is concluded with a declaration of the treatment strategy of that time—“an ailment not to be treated.” The Egyptians refrained from surgical interventions but relieved urinary retention by using bronze catheters.

Trojan documentation about history of SCI

The next known reference to traumatic SCI is dated to the time of the TrojanWar (circa 1100 BC). Three immortal brothers, Zeus, Poseidon, and Hades, ruled the sky and the living, the seas, and the nether world, respectively. In the epic tale of the Odyssey, the youngest of Odysseus’ companions, Elpenor, fell from the palace roof, broke his neck, and his soul went down to Hades.

Greek documentation about history of SCI

Seven hundred years later, Hippocrates (circa 460–377 BC), the “father of medicine,” analyzed the relationship between vertebral injuries and paralysis. He observed that if damage to the spinal cord only occurred on one side, a subsequent paralysis always was located on the same side as the damage.Until the time of Hippocrates, Aesculapius, the sun-god Apollo’s son, was considered in the Greek mythology to be the god of medical healing, and the ancients believed that all such healing flowed from him. With his observations and practical application of basic medical knowledge, however, Hippocrates succeeded in separating medicine from mythology. Because of his efforts, medicine became a worldly and rational endeavor. He is the main author of the book Corpus Hippocraticum, which summarizes the medical knowledge of that time, and in it he describes for the first time the clinical condition of chronic paralysis.

Hippocrates presents the difficulties, such as constipation, painful urination, pressure sores, and leg swelling, associated with the aftermath of traumatic SCI. He advocated a diet consisting of four to nine pints of milk combined with honey and a special mild white wine from Mendez in Egypt to mitigate these problems.

On Hippocrates advice, pressure sores were treated with exposure to the air in combination with the direct application of wine, juice, vinegar, and oils, as well as aluminum salt and lead. He recommended that the bandages be changed every third day to avoid infections. 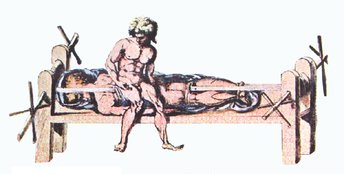 The ancient Greeks frequently used spinal manipulations to manually reduce malformations. Hippocrates introduced two devices, the Hippocratic ladder and the Hippocratic board for this purpose. The patient was placed in a prone position and was stretched from the shoulder area upward, and from the hips downwards A medical orderly then either sat or stood on the deformity until reduction; alternatively, a wooden board was placed crosswise over the injured area to achieve a similar compression.

Greco-Roman documentation about history of SCI

Only few fragments of written documentation remain regarding SCI from the Greco- Roman era. Aulus Cornelius Celsus, working during the 1st century BC, built upon the medical tradition of Hippocrates. He became aware of the importance of the spinal cord itself, and he was probably the first to document rapid death as a consequence of a cervical SCI. Celsus introduced the closing of small open pressure sores with female hair as suture material. Within the field of medicine, the Greco-Roman era was represented by two prominent figures, Galen and Paul of Aegina.

The Greek Galen (129–199 AD), physician-inordinary to the Emperor Marcus Aurelius and also called the “second Hippocrates,” was the first to report on the effect of experimental incisions of the spinal cord. Galen noted that a longitudinal incision to the spinal cord did not result in any symptoms but a transverse incision at the level of the second and third cervical vertebrae results in loss of motion and sensory functions below the level of the incision. He also described the number of vertebrae comprising the different parts of the spinal column and introduced the terms scoliosis, lordosis, and kyphosis.

The famous surgeon Paul (625–690), from the Greek island of Aegina, described the importance of clinical examination. He concluded that a fracture of the vertebra should be suspected if the physician was unable to palpate the spinous process belonging to the damaged vertebra. This is the first time that the removal of vertebral arches (i.e., a laminectomy) is described as a treatment for spinal fractures, and Paul of Aegina is considered the originator of this procedure.

Indian documentation about history of SCI

Documents from India dated to the second and third century mention immobilization as a treatment option for fractures in the lumbar region. The Sushruta Samhita, a Sanskrit text on surgery, describes patients being laid on a table to which they were bound with ropes to correct spinal deformities. Hindu descriptions of treating spinal deformities with axial traction precede Hippocrates by a millennium.

Medical science during the medieval period was hampered by superstition and intellectual stagnation. Western medicine during this period is regarded as primitive, and was predominantly practiced by monks. The most important medical reference during this period, The Canon of Medicine, was written by the Persian astronomer and physician Avicenna (Ibn Seena). Leonardo da Vinci (1452–1519) was the first to describe the physiological curvatures of the spine, and he also suggested the importance of the neck muscles in contributing to the stability of the cervical spine. His dissections of the spine formed the basis for highly detailed drawings of the joints, vertebrae, muscles, and tendons. 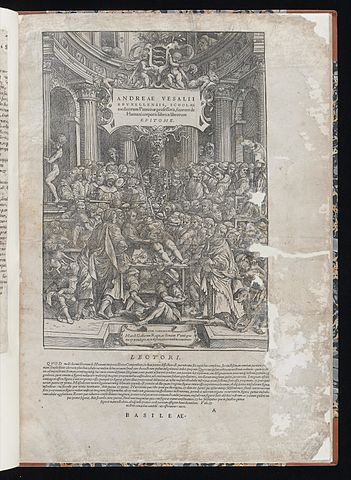 After nearly a thousand years of medical stagnation, in 1543, during the Renaissance, the Flemish anatomist and physician Andreas Vesalius published one of the greatest medical books ever written. This treatise of seven volumes entitled De Humani Corporis Fabrica (The Fabric of the Human Body), contains for the first time drawings in which the human nervous system is correctly illustrated. The illustrator Johann Stephan van Calcar produced all the drawings for Vesalius’ work. Because, until that time, the anatomical conception of the human body as presented by Galen had been based on studies done on monkeys, not humans, the work of Vesalius constitutes the first textbook to present human anatomy in a detailed and correct fashion.

France documentation about history of SCI

The German surgeon Fabricius Hildanus in 1646 described a method to reduce dislocations in the cervical region. A clamp was inserted through the spinous processes in the neck, after which traction was applied. This closed reduction was supplemented by open reduction if necessary.

In 1814, the English surgeon Henry Cline performed a laminectomy at the thoracic level. The patient, who suffered a fracture and a SCI, died nine days later. This resulted in a quite nihilistic attitude toward this type of surgical intervention, as is illustrated by the following quotation from 1824: “Laying a patient upon his belly and by incisions laying bare bones and exposing the spinal marrow itself, exceeds all beliefs.”

However, a successful laminectomy performed following trauma was reported soon thereafter in 1829, by the American surgeon Gilpin Smith. The operation resulted in improved sensibility and the progressive neurological deterioration seen before surgery was reduced. Charles Bell introduced the clinically important concepts of spastic and flaccid paralysis in 1824, and he also described the concept of spinal shock.

World War I documentation about history of SCI

During World War I, mortality following SCI was as high as 80% within the first two weeks following injury. Given these poor prognostic figures, a nihilistic attitude toward treatment persisted during the 1920s and 1930s, until the modern era of rehabilitation began in 1943. In that year, the Stoke Mandeville National Spinal Injuries Centre was opened in England by neurosurgeon Sir Ludwig Guttmann. A similar pioneering work was conducted by Bors in the USA. The well-structured and comprehensive rehabilitation at the center did not only help patients survive but also to re adapt to society. The Stoke Mandeville Centre was, and is still, a model for many other rehabilitation units around the world. The implementation of the treatment model developed by Guttmann, together with concurrent progress within other fields of medicine, has prolonged the survival time for this group of patients by approximately 2000% since 1940.

Modern care of the SCI patient

Modern care of the SCI patient requires knowledge within a variety of medical fields such as rehabilitation, urology, intensive care, algology, orthopedics, neurosurgery, fertility, and pharmacology, and also an interest in research and development. At present, the goal of healing the injured spinal cord is still out of reach. There exist, however, many therapeutic measures to offer the SCI patient as to improve his health and quality of life. Within the field of SCI, the main focus of research is currently directed toward neuroprotection and, especially, regeneration. Another ongoing challenge within the area of rehabilitation is to offer treatments in order to ensure a long, healthy, and fulfilling life.

References about History of SCI

Return from History of SCI to Home Page