The PAIN GATE THEORY or GATE CONTROL THEORY OF PAIN, put forward by Ron Melzack and Patrick Wall in 1965, is the idea that physical pain is not a direct result of activation of pain receptor neurons, but rather its perception is modulated by interaction between different neurons.

They suggested that there is a "gating system" in the central nervous system that opens and closes to let pain messages through to the brain or to block them. Pain gate theory is often used to explain phantom or chronic pain.

Gate control theory of pain is an attempt to discuss about how pain sensation is transmitted. Pain is defined as the subjective sensation which accompany the activation of nociceptors and which signals the location and strength of actual or potential tissue damaging stimuli.

Various types of pain may range from mild irritation, through burning and prickling sensation to more intense stabbing and throbbing sensation and finally to agonizing and intractable pain which may be intolerable to many subjects.

Nociceptors They are generally free nerve endings, which are embedded throughout the tissue with varying density. They have relatively high threshold to activation and are sensitive to potentially tissue damaging stimuli, such as mechanical, thermal, electrical and chemical.

Small diameter afferent nerve fibres- They arrise from free nerve endings and convey the action potential through the spinal cord and Higher centres of CNS.

They are of 2 types- 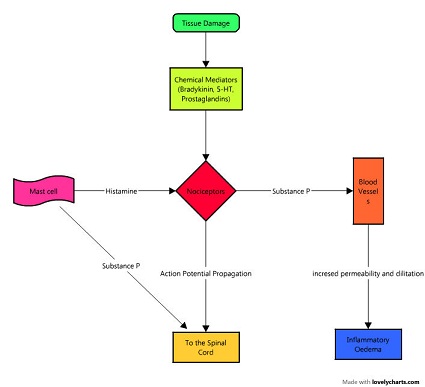 Nociceptor afferent enters the spinal cord via dorsal root and makes synaptic connections with other neurons located in the dorsal horn of the spinal cord grey matter, which is the site of convergence of many inputs. The main reflexes involving nociceptor reflex are- Withdrawal reflex and Crossed extensor reflex.

Nociceptive efferent enter the spinal cord, terminate on the dorsal horn and make synaptic connections with-

At the level of spinal cord

As already noted primary nociceptive afferent terminate at the 2nd order neuron or T cells. The excitability of this pathway can be altered by other inter neurons present in the dorsal horn. The cells of Substantia gelatinosa have an inhibitory influence on the transmission cell by Presynaptic Inhibition of the nociceptive afferent terminals at the point where they synapse with transmission cells.

If the nociceptive information is allowed through the gate according to gate control theory of pain, then the traffic will continue up the lateral spinothalamic tract of the spinal cord through the thalamus and to the cerebral cortex. As the stimulus passes through brain stem, it may cause an interaction between Periaqueductal grey matter and the raphe nucleus in the mid brain.

These nuclei form part of the Descending pain suppression system and their neurons lead to the excitation of Substantia Gelatinosa cells and thus will cause inhibition of the pain transmission. The endogenous opioids the enkephelins, endorphins and dianorphins are involved in pain modulation at this level. They are thought to be associated to produce analgesia related only to prolonged pain rather than initial fast pain, produced when an injury first occurs. Therefore the inhibitory effect of higher centers influence the pain transmission mediated through C fibres.

The overall balance of excitation and inhibition determines whether or not the nociceptive information is related to the higher cognitive centers of the brain. This modulation of pain transmission by altering the influences of different inputs to the transmission cells is known as GATE CONTROL THEORY OF PAIN, established by Ronald Melzack and Patrick Wall in 1965.

So, according to Gate control theory of pain, Gate is open when Substantia Gelatinosa cells are inhibited as the cells allows nociceptive stimulation to be passed on higher center and the Gate is closed when SG cells are excited. Gate control theory of pain argues that human thoughts, beliefs and emotions affect the amount of pain felt from a given physical sensation. The basis of this theory is that both the psychological and physical factors guide the brain’s interpretation of painful sensations and subsequent response.

Modulation of pain by Physical Therapy

At the level of Higher Centres The Physio therapeutic agents which cause stimuli to flow along nociceptive fibres can stimulate the higher centers to inhibit to inhibit the pain transmission. Modalities used include- ice, friction, Ultrasonic therapy, UVR, low TENS, thermotherapy.

At the Periferal level i) Chemical released by the tissue injury may stimulate the nociceptive nerve ending. Degree of stimulation depends on the amount of chemical present. Therefore removal of these chemicals by the physio therapeutic agents affecting the circulation may help to reduce the level of nociceptive stimulation. Example- HEAT, ICE, CONTRAST BATH.

ii) Nociceptive fibres have a maximum frequency at which they can conduct. C fibres- 15 pulse/sec and A delta fibres- 40 pulse/sec. If higher frequency of stimulation is applied, a physiologic block to conduction might occur. Example- TENS and IFT.

What Other Visitors Have Said

Click below to see contributions from other visitors to this page...

What Is Neuropathic Pain?

Neuropathic pain is caused by aberrant signal processing in the peripheral or central nervous system. In other words, neuropathic pain reflects nervous …

Return from Gate Control Theory Of Pain to home page