A positive Trendelenburg gait (gluteus medius gait/lurching gait ) is generally indicative of hip abductor weakness. The classic Trendelenburg's gait pattern is seen when the stance phase hip abductors cannot resist the pull of gravity on the unsupported swing phase lower extremity. The therapist will observe the swing phase pelvis dip below level. A compensated Trendelenburg's pattern is observed when the client deviates the body in the frontal plane toward the stance leg to decrease the moment arm of gravitational forces pulling on the swing side, decreasing load on the stance side abductors. Although Dimattia et al. found that alone, the Trendelenburg's position was a poor predictor of hip abduction strength, it remains a useful observational tool to clue the therapist to core impairments affecting gait. 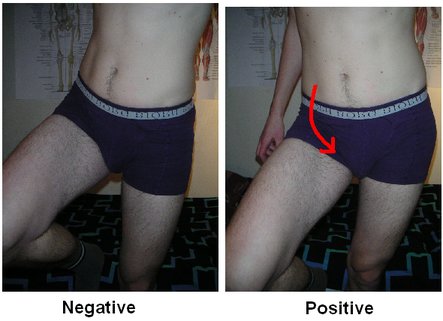 Trendelenburg’s sign is a test used to determine whether the patient has adequate hip abductor strength, particularly of the gluteus medius. To perform this test the patient is instructed to stand on both feet and slowly raise one foot off of the ground without additional support. If the patient has adequate abductor strength, then the iliac crest of the raised leg should remain parallel with or elevated slightly in relation to the contralateral side. In addition, the patient should maintain an upright posture without significant tilt of the upper trunk, which would indicate a compensatory mechanism to help the patient maintain his or her balance.

A positive Trendelenburg sign is defined as either a compensatory tilt of the torso (vide supra) or a drop of the contralateral iliac crest (See Fig above), indicating that the ipsilateral hip abductors are unable to contract with adequate force to maintain a level pelvis. Instability of the pelvis from other etiologies may also create a positive Trendelenburg’s sign resulting from increased tensile forces on the bony structures of the hip. Therefore, diagnoses causing pelvic instability, such as Legg–Calve–Perthes disease or acetabular fractures of any etiology, may be considered as alternate causes of a positive test.

The Trendelenburg gait, often discussed by writers concerned with hip pathology, is really only a magnification of normal movement pattern, much like the double bump anterior pelvic motion. This gait is a response to mild weakness in the abductors as the hip on the swing side drops more to pretension the abductor muscle until it finds the strength to resist. Increased movement of the center of mass of the HAT segment over the weightbearing limb is usually combined with this, thereby decreasing the force needed to resist the drop of the pelvis. This pattern may also suggest mechanical instability of the hip joint, such as hip subluxation, and hip radiographs should be obtained. With severe weakness of the abductor muscles, the center of mass of the HAT segment will move completely over the weightbearing limb, usually with elevation of the pelvis on the swing side. This movement is called a hip lurch, in which the trunk muscles can also be used to control the drop of the pelvis on the swing limb side.

Treatment of Trendelenburg gait is by strengthening of the abductor muscles when possible. Treatment of the lurching gait pattern is by strongly encouraging patients to use forearm crutches, which will decrease both the energy of walking and the force on the joints in the lower extremities, especially the knee joint. Some of these movement patterns may also occur secondary to pain in the hip joint. Therefore, a good history should be available with the gait analysis.