Stage of Spinal Shock or Areflexia 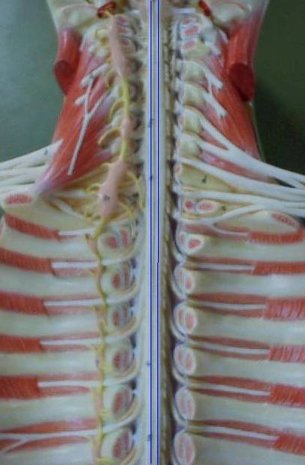 Spinal Shock is acute transient stage of spinal cord lesion resulting in flaccid paralysis below the level of injury, with muscular hypotonia and loss of deep tendon and superficial reflexes. This is assumed to be the result of a conduction block of electrical transmission in the spinal cord.

When the spinal cord is suddenly and virtually or completely severed, three disorders of function are at once evident:

The last effect, called spinal shock, involves tendon as well as autonomic reflexes. It is of variable duration (1 to 6 weeks as a rule but sometimes far longer) and is so dramatic that is used as a basis for dividing the clinical effects of spinal cord transection into two stages, that of spinal shock and areflexia followed by the stage of heightened reflex activity. The separation of these two stages is not as sharp as this statement might imply but is nevertheless fundamental and useful for exposition. Less complete lesions of the spinal cord result in little or no spinal shock, and the same is true of any type of lesion that develops slowly.

Stage of Spinal Shock or Areflexia

The loss of motor function at the time of injury—tetraplegia with lesions of the fourth to fifth cervical segments or above, paraplegia with lesions of the thoracic cord—is accompanied by immediate atonic paralysis of bladder and bowel, gastric atony, loss of sensation below a level corresponding to the spinal cord lesion, muscular flaccidity, and almost complete suppression of all spinal segmental reflex activity below the lesion. As a result of their sudden separation from higher levels, the neural elements below the lesion fail to perform their normal function.

However, the physiologic basis of this reflex segmental paralysis is incompletely understood as noted later. Also impaired in the segments below the lesion is the control of autonomic function. Vasomotor tone, sweating, and piloerection in the lower parts of the body are temporarily abolished. Systemic hypotension may be severe and contribute to the spinal cord damage. The lower extremities lose heat if left uncovered, and they swell if dependent. The skin becomes dry and pale, and ulcerations may develop over bony prominences. The sphincters of the bladder and the rectum remain contracted to some degree due to the loss of inhibitory influence of higher central nervous system (CNS) centers, but the detrusor of the bladder and smooth muscle of the rectum are atonic. Urine accumulates until the intravesicular pressure is sufficient to overcome the sphincters; then driblets escape (overflow incontinence). There is also passive distention of the bowel, retention of feces, and absence of peristalsis (paralytic ileus). Genital reflexes (penile erection, bulbocavernosus reflex, contraction of dartos muscle) are abolished or profoundly depressed.

The duration of the stage of spinal shock with complete areflexia varies considerably as mentioned. In a small number it is permanent, or only fragmentary reflex activity is regained many years after the injury. In such patients the spinal segments below the level of transection may have themselves been injured—perhaps by a vascular mechanism, although this explanation is unproven. More likely there is a loss of the brainstem-spinal facilitatory mechanisms and an increase in inhibitory activity in the isolated segments. In other patients, minimal genital and flexor reflex activity can be detected within a few days of the injury. In the majority, this minimal reflex activity appears within a period of 1 to 6 weeks. Usually the bulbocavernosus reflex is the first to return. Noxious stimulation of the plantar surfaces evokes a tremulous twitching and brief flexion or extension movements of the great toes. Contraction of the anal sphincter can be elicited by plantar or perianal stimulation, and other genital reflexes reappear at about the same time.

The explanation of spinal shock, which is brief in submammalian forms and more lasting in higher mammals, especially in primates, is believed to be the sudden interruption of suprasegmental descending fiber systems that normally keep the spinal motor neurons in a continuous state of subliminal depolarization (ready to respond). In the cat and monkey, Fulton found the facilitatory tracts in question to be the reticulospinal and vestibulospinal. Subsequent studies showed that in monkeys, some degree of spinal shock could result from interruption of the corticospinal tracts alone. This cannot be the significant factor, however, at least in humans, because spinal shock does not result from acute cerebral and brainstem lesions that interrupt the corticospinal tracts. The F-waves, electrophysiologic responses that reflect the functioning of the motor neurons of the isolated segment of the cord, are suppressed until spasticity supervenes, at which time they become overly easy to elicit.

This is the more familiar neurologic state that emerges within several weeks or months after spinal injury. Usually, after a few weeks, the reflex responses to stimulation, which are initially minimal and unsustained, become stronger and more easily elicitable and as time passes come to include additional and more proximal muscles. Gradually the typical pattern of heightened flexion reflexes emerges: dorsiflexion of the big toe (Babinski sign); fanning of the other toes; and later, flexion or slow withdrawal movements of the foot, leg, and thigh with contraction of the tensor fascia lata muscle (the last several features often referred to as “triple flexion”). Tactile stimulation of the foot may suffice as a stimulus, but a painful stimulus is more effective. The Achilles reflexes and then the patellar reflexes return. Retention of urine becomes less complete, and at irregular intervals urine is expelled by spontaneous contractions of the detrusor muscle. Reflex defecation also begins. After several months the withdrawal reflexes become greatly exaggerated, to the point of flexor spasms, and may be accompanied by profuse sweating, piloerection, and automatic emptying of the bladder (occasionally of the rectum). This is the “mass reflex,” which can be evoked by stimulation of the skin of the legs or by some interoceptive stimulus, such as a full bladder. Varying degrees of heightened flexor reflex activity may last for years. Heat-induced sweating is defective, but reflex-evoked (“spinal”) sweating may be profuse.

Presumably, in such cases the lateral horn cells in much of the thoracic cord are still viable and are disinhibited. Above the level of the lesion, thermoregulatory sweating may be exaggerated and is accompanied by cutaneous flushing, pounding headache, hypertension, and reflex bradycardia. This syndrome (“autonomic dysreflexia”) is episodic and occurs in response to a certain stimuli, such as a distended bladder or rectum. It has been ascribed to the reflex release of adrenalin from the adrenal medulla and of norepinephrine from the disinhibited sympathetic terminals caudal to the lesion.

The development of paraplegia in flexion (extreme flexion of the hips and knees, as in a fetal position) relates also to the level of the lesion, being seen most often with cervical lesions and progressively less often with more caudal ones. Important also are repeated flexor spasms, which are more frequent with higher lesions, and the ensuing contractures ultimately produce a fixed flexor posture. Conversely, reduction of flexor spasms by elimination of nociceptive stimuli (infected bladder, decubiti, etc.) favors an extensor posture of the legs (paraplegia in extension). Thus, prolonged fixation of the paralyzed limbs in adduction and semiflexion favors subsequent paraplegia in flexion. Placing the patient prone or placing the limbs in abduction and extension facilitates the development of predominantly extensor postures. Nevertheless, strong and persistent extensor postures are usually observed only with partial lesions of the spinal cord.