Rounded Back or Increased Kyphosis 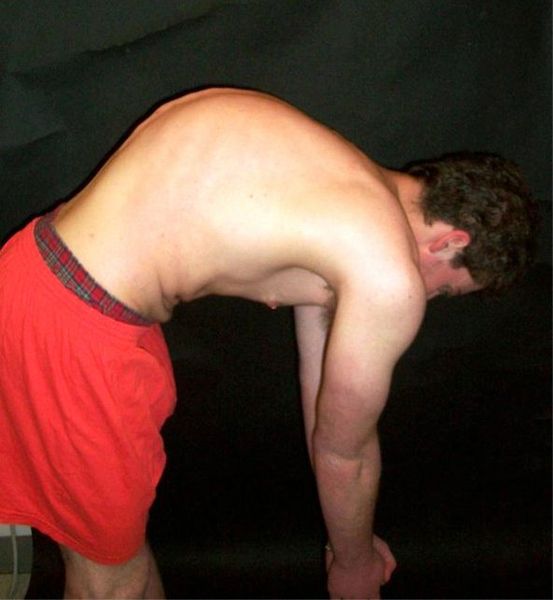 This posture is characterized by an increased thoracic curve, protracted scapulae (round shoulders), and usually an accompanying forward head.

Faulty upper quadrant posture leads to an imbalance in the length and strength of the scapular and glenohumeral musculature and decreases the effectiveness of the dynamic and passive stabilizing structures of the Glenohumeral(GH) joint. Typically with increased thoracic kyphosis, the scapula is protracted and tipped forward, and the GH jointis in an internally rotated posture. With this posture, the pectoralis minor, levator scapulae, and the shoulder internal rotators are tight, and the lateral rotators of the shoulder and upwards rotators of the scapula test weak and have poor muscular endurance. There is no longer the stabilizing tension on the superior joint capsule and the coracohumeral ligament or compressive forces from the rotator cuff muscles. Therefore, the effect of gravity tends to cause an inferior force on the humerus.

Common Causes of Kyphosis are

Kyphosis can be manifest as part of the clinical picture of a number of generalized conditions. Children with high-level myelodysplasia generally develop lumbar kyphosis due to the absence of posterior structures. Two of the more malevolent mucopolysaccaridoses, Hunter and Hurler syndromes, may present with kyphosis in infancy. Thoracolumbar kyphosis also commonly affects infants with achondroplasia. Fortunately, most resolve with walking. Other unusual causes include Gaucher's disease, juvenile osteoporosis, and pseudoachondroplasia. Kyphosis in conditions accompanied by ligamentous laxity such as Ehlers Danlos syndrome and Marfan syndrome commonly affect the thoracolumbar or lumbar spine. Lumbar or thoracolumbar kyphosis is difficult to treat as junctional kyphosis above or below the instrumented portion of the spine often occurs unless excellent sagittal plane alignment is achieved. Kyphosis accompanying neurofibromatosis often is accompanied by severe rotatory deformity and can be very difficult to treat. Cervical kyphosis can be a part of diastrophic dysplasia or Larsen's syndrome . In parts of the world, where tuberculosis is prevalent, screening of children for kyphosis can aid earlier diagnosis. As children with cystic fibrosis live longer into adult life, kyphosis accompanying this condition is more often being reported. For conditions such as juvenile osteoporosis or Maroteaux-Lamy syndrome, in which the kyphosis is flexible and radiographically corrects when the patient is placed supine over a bolster, bracing can be effective.

According to the severity and the extent of disease, there are three degrees:-

Early diagnosis help prevent the progression of the severity. Treatment is given according to the degree of deformity. Its important to realize, however, that correction of kyphotic posture takes time. It involves exercises, stretches, mobilizations, as well as continual postural correction.

It is usually due to poor posture. Postural Kyphosis Treatment include certain physical therapy exercises to strengthen the patient's paravertebral muscles. Further, the patient must make a conscious effort to work toward correcting and maintaining proper posture.

Abdominal stretching: Stretching your abs can help tremendously in reducing thoracic kyphosis, because at the same time you stretch them, you are mobilizing your spine. One of the best ways to stretch your abs is by laying over a swiss ball. Its important to make sure you relax as you do this stretch, and breath naturally, as this will serve to improve the release you get.

Foam rolling the thoracic spine: This technique involves laying over a foam roll, for the purpose of mobilizing your spine. Basically this means stretching it backwards over the roll. This technique can be quite tender on your spine at first, particularly at those spinal segments that are not moving very well, but can improve quickly over about 2 weeks with consistent work on the roller. 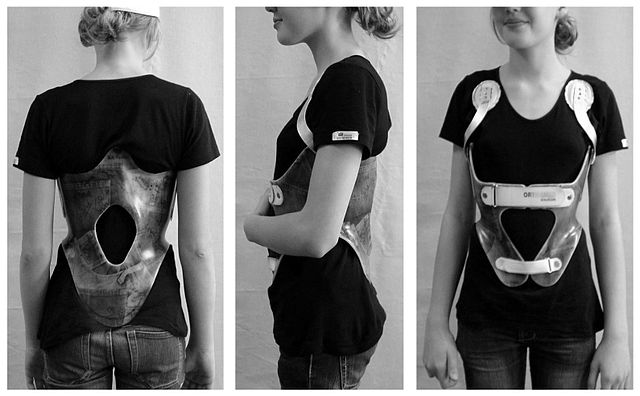 The Deformity is in advanced stage. Hence to correct it brace is given to the patient. Along with bracing, exercises also play role in improving mobility of the spine.

Physical therapy is often used at the same time as bracing. Because the brace supports so much of the spine, some believe that wearing the brace can weaken the muscles. Physical Therapy help avoid this. Otherwise, when the brace comes off, the muscles may not be able to support the spine very well, and the spine may still curve too much.

The physical therapist also help with flexibility and range of motion. Many patients with Scheuermann's kyphosis also have very tight hamstring muscles. Physical therapy can help alleviate those tight muscles.

Physical therapy won't correct the kyphotic curve caused by spinal fractures, but to prevent more fractures, it may be useful to learn good (or better) posture. A physical therapist can also help strengthen spinal muscles so that spine is better supported—taking some of the weight and pressure off vertebrae.

The surgical procedure for structural kyphosis treatment involves halo traction for several weeks. In some cases, bone graft may be required to maintain the correction. Sometimes spinal decompression and stabilization may also be required. Spinal Instrumentation and Fusion are surgical procedures that may be used to correct spinal deformity and to provide permanent stability to the spinal column. These procedures join and solidify the level where a spinal element has been damaged or removed (e.g., intervertebral disc). Instrumentation uses medically designed hardware such as rods, bars, wires, and screws. These devices hold the spine straight during fusion.

Physical therapy is added post-operatively enabling the patient to build strength, flexibility, and increase range of motion. The patient continues physical therapy on an outpatient basis for a period of time. Additionally, the therapist provides the patient with a customized home exercise program for kyphosis treatment.