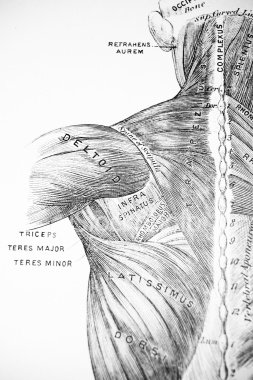 Scapulothoracic Joint is a ‘physiologic’ joint. Not a true joint because the only osseous link between the scapula and axial skeleton occurs at the clavicle. This Joint is the least congruent joint in the body. The scapula moves through a gliding mechanism in which the concave anterior surface of the scapula moves on the convex posterolateral surface of the thoracic rib cage. Smooth scapular gliding is assisted by bursa located at the superior and inferior angles and base of the scapular spine.

The scapula (shoulder blade) is a very involved structure of the body. Not only does this bone articulate with the humerus (upper arm bone) and clavicle (collar bone), it is also the attachment site for many muscles in the shoulder itself, as well as the back, the chest, the arm, and even the neck. It is therefore easy to comprehend how a weakness in this area could affect many others in the body.

The muscles that attach on the medial (inside) aspect of the scapula are the key muscles for scapular stabilization. These include the middle trapezius and lower trapezius, rhomboid major, and rhomboid minor, and serratus anterior. The middle trapezius and rhomboid muscles function to retract the scapula. Scapular retraction is the action of squeezing your shoulder blades together. The lower trapezius takes care of scapular depression which is drawing the scapula down the thorax. The task of serratus anterior is to hold the scapula’s medial border tight to the thorax.

Many of these weaknesses are actually observable. When the lower trapezius muscle is weak, a flaring of the lower scapula exists. When the serratus anterior is weak, the medial border of the scapula flares. Weakness of the middle trapezius and rhomboid muscles contributes to a separation of the scapulae, also known as protraction.

It is therefore the job of these muscles to hold the scapulae tight to the thorax. If the scapulae are not held firmly by strong muscles, they are left free to flare and flop with arm movements. Without stability at the scapula, how is it possible for the glenohumeral joint (shoulder joint) to remain stable? It isn’t.

Scapular instability leaves the glenohumeral joint (GH joint) at risk of injury as the GH joint requires both strength and endurance of scapular stabilizers for it to be protected. The stability of the GH joint cannot come from the humerus since the arm does not have anything to stabilize from; it has no anchors. However, the scapula attaches to the axial skeleton of the body (a fantastic anchor) and therefore can generate stability from the thorax. Strong scapular stabilizers have been proven to defend the GH joint from injury.

Scapulohumeral Rhythm describes the movement of the scapula in relationship to the humerus i.e The motions of the scapula, clavicle, and humorous working together to achieve full elevation of the arm. As the head of the humerus moves, the scapula simultaneously seeks a position of stability in relation to the humerus to maintain the humeral head in optimal alignment within the glenoid fossa. Scapulo-humeral rhythm serves at least two purposes…

1. Preservation of the length-tension relationships of the glenohumeral muscles; the muscles do not shorten as much as they would without the scapula's upward rotation, and so they can sustain their force production through a larger portion of the range of motion. If a stable osseous base does not exist for scapular musculature, stability is sacrificed. Muscles without a stable base of origin, muscles cannot develop appropriate or maximal concentric torque, resulting in decreased strength, muscular imbalance and compensatory functioning of other muscles.

When the arm is fully elevated by abduction or flexion

The scapulothoracic joint is not a true joint in the sense in that it has no capsule or ligamentous attachments. It is more precisely identified as the scapulothoracic articulation. It is formed between the anterior scapula and the posterior thoracic rib cage(ribs 2-7). The scapula's attachment to the axial skeleton in a healthy shoulder is purely musculotendinous in nature, formed by the trapezius and serratus muscles. Its gliding movement patterns consist of elevation/depression, retraction/protraction, and superior/inferior rotation. However, fibrous adhesions can sometimes occur following a shoulder injury, particularly if the joint has been immobilized for a long period of time. This severely impairs the movement of the shoulder, particularly with abduction past 90 degrees.