Glossopharyngeal breathing (GPB) is a technique useful in patients with a reduced vital capacity owing to respiratory muscle paralysis, for example following poliomyelitis or in tetraplegic. It is a trick movement that was first described by Dail (1951) when patients with poliomyelitis were observed to be gulping air into their lungs. It was this gulping action that gave the technique the name 'frog breathing'.

Glossopharyngeal breathing is a form of positive pressure ventilation produced by the patient's voluntary muscles where boluses of air are forced into the lungs. Paralyzed patients dependent on a mechanical ventilator may be able to use GPB continuously, other than during sleep, to substitute the mechanical ventilation. The most common use of GPB is in patients who are able to breathe spontaneously but whose power to cough and clear secretions is inadequate. The technique may enable these patients to shout to attract attention and it may help to maintain or improve lung and chest wall compliance (Dail et al 1955). 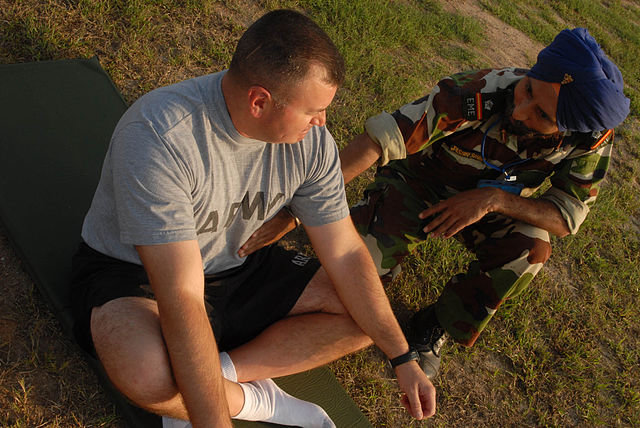 To breathe in, a series of pumping strokes is produced by action of the lips, tongue, soft palate, pharynx and larynx. Air is held in the chest by the larynx which acts as a valve as the mouth is opened for the next gulp. Before starting to teach a patient glossopharyngeal breathing it is helpful for him to inflate his chest using an intermittent positive pressure ventilator with a mouthpiece. He can practice holding the breath while removing the mouthpiece and avoiding escape of air through the larynx or nose. The most important step in learning GPB is the up and down movement of the cricoid cartilage while keeping the jaw still. The patient can practice by watching the movement in a mirror and feeling the cartilage with his fingers.

When this movement has been achieved a cycle of three steps is practised:

This sequence should be practised slowly at first and then gradually speeded up until the movement flows. A leak of air may occur through the nose and, until it is prevented by the soft palate, a nose dip may be required.

The next stage is to take a maximum breath in and, while holding this breath, to add several glossopharyngeal gulps, to augment the vital capacity. When correct, the patient will feel his chest filling with air, and the physiotherapist can test the 'GPB vital capacity' by putting a mouthpiece attached to the expiratory limb of a Wright's respirometer in the patient's mouth before he exhales.

The respirometer can be used to measure the volume per gulp; the patient will require less effort and reach his maximum capacity more quickly if he develops a bigger volume per gulp. A study by Kelleher & Parida (1957) reported a group of patients in whom the average volume per gulp varied from 25-120 ml, and when teaching GPB an attempt should be made to achieve at least 60 ml per gulp. When used for clearance of secretions, 10-20 gulps may be required to obtain a maximal vital capacity, but if GPB is being used continuously as a substitute for normal tidal breathing approximately 6-8 gulps may be taken before breathing out.

Glossopharyngeal breathing would normally be taught with the patient in a comfortable sitting position, but when mastered should be practiced in positions useful for the patient to clear his bronchial secretions. After filling his chest to capacity he signals to the physiotherapist who compresses his chest as he lets the air out The patient may have sufficient muscle power to apply compression himself or carers can be taught to give assistance.

GPB is learnt easily by some patients, but others need time and patience to acquire this skill and must be motivated to practise frequently during the learning period. It is a valuable technique to consider when treating tetraplegic or poliomyelitis patients with a vital capacity of less man 2 litres. Instruction can begin when the patient has reached a stable condition, but it is inappropriate in the acute phase or during an acute chest infection. When successfully learnt it is invaluable during a period of chest infection to assist in the clearance of secretions. For a patient with a chest infection nursed in a 'tank' ventilator ('iron lung'), assisted coughing (Higgens 1966) may be more effective if the patient uses GPB to augment the inspiratory volume received from the ventilator before chest compression is applied.

It is possible to teach Glossopharyngeal breathing to patients with an uncuffed tracheostomy tube, provided there is an effective seal round the tube to avoid air leaks.