Ankylosing Spondylitis (AS) is a sero negative, progressive chronic inflammatory disease. Over 90% of patients are HLA-B27 positive.

It starts with back pain and a general feeling of ill health which eventually leads to stiffening and inability to bend the spine. In worst cases, the spine becomes like a solid rod of bone between the skull, neck and pelvis hence named as POKER'S BACK. Over 90% of patients possess HLA-B27 (Human Leucocyte Antigen). AS results in bony ankylosis beginning with ossification of ligaments and tendons of the spine, particularly at junctions with bones. ossification usually starts at the dorso lumbar region or sacro iliac joint. Around the joint there is loss of cortex and erosions with consequent widening of joint space. Later in the disease process, there is sclerosis and finally ankylosis.

The exact cause of Ankylosing Spondylitis (AS) is unknown but there are two factors which are thought to be the cause of this condition.

Prevalence varies in different races, in white population it is between 1-10 patients per 1000 persons. The age of onset is commonly in 18-30 but can start at any age.

males are more commonly affected than females, usually the ratio is 3:1. The first degree relatives of the patient of AS have more chances to develop this condition.

The pathology of AS include the following process-

Synovitis Initially, the inflammation of the synovium occur, which may be identical histologically to that in rheumatoid arthritis(RA). Mostly commonly the synovitis starts, firstly from the sacroiliac joints followed by the other region of the spine.

Enthesopathy This term refers to an inflammatory reaction at the enthesis which is the zone of ligamentous attachment to the bone, and this is the characteristic feature of AS that occurs commonly in the spine and near the pelvis.

Cartilage Destruction and Bony Erosion This occur due to synovitis and the inflammation of the ligament and the capsules. The cartilage of the joint gets destroyed, and becomes rough and the bony erosion occurs.

Ossification All the above factors lead to the formation of new bones at these areas, and bridging takes place between the vertebral bodies, usually from the edge of one body to that of the next, along the outer layer of the disc. This typical phenomenon is known as the marginal syndesmophyte formation. Ossification also occurs in the anterior and posterior longitudinal ligament and also in other ligaments of the spine.

Ankylosis All the features of the above and most important the ossification part, results into fusion of all the vertebrae of the spine, and this condition is called bamboo spine. The formation of the syndesmophytes starts usually from the dorso-lumbar region. After bony fusion the pain may subside, leaving the spine permanently stiff. 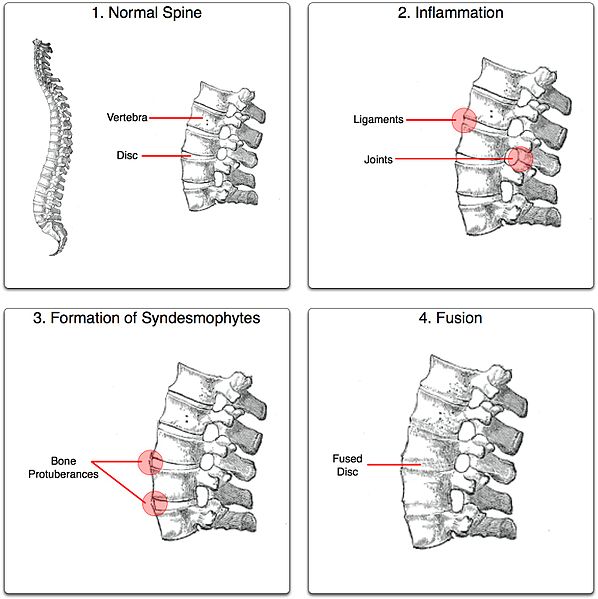 The severity of symptoms can vary from mild to very severe.

Common symptoms may include:

Less common symptoms may include:

Erythrocyte Sedimentation Rate The sedimentation rate is generally raised in proportion to the inflammatory activity in about 70% of patients.

HLA-B27 test This is positive in about 95% of patients.

Haemoglobin Normochromic or normocytic anaemia may occur but in contrast to RA, patients with active disease often have a normal haemoglobin and blood film.

The features of different sites are:

The course of AS varies. Symptoms may be persistant or intermittent over the years or we can say that the disease is present throughout the life but does not shorten the life of the patient. AS shows a wide range of severity. In some individuals, the disease is mild and although it may show periods of exacerbation with increased pain and stiffness, there is little permanent limitation of the spine. At the other end, the disease may progress or may be uncontrolled, causing marked and permanent spinal rigidity. Since patients with spinal pain tend to flex the back and neck, and ankylosis occurs in this position producing variable degrees of a fixed 'C' shaped deformity. Hip involvement is prognostically important, because it adds to the difficulty in mobility and further impairs functions.

There is no specific therapy or cure for AS. The aim of Ankylosing Spondylitis Treatment are:-

Nonsteroidal anti-inflammatory drugs (NSAIDs), like naproxen (Naprosyn) or indomethacin (Indocin) are used to relieve pain and stiffness. In severe cases, sulfasalazine (Azulfidine), another drug to reduce inflammation, or methotrexate (Rheumatrex), an immune-suppressing drug, is recommended.

In cases where chronic therapy is needed, potential drug side effects must be taken into consideration. Corticosteroid drugs are effective in relieving symptoms, but are usually reserved for severe cases that do not improve when NSAIDs are used. To avoid potential side effects, treatment with corticosteroids is usually limited to a short amount of time with a gradual weaning from the drug.

Corticosteroid therapy or medications to suppress the immune system may be prescribed to control various symptoms. Some health care professionals use cytotoxic drugs (drugs that block cell growth) in people who do not respond well to corticosteroids or who are dependent on high doses of corticosteroids.

Drugs called TNF-inhibitors have been shown to improve the symptoms of ankylosing spondylitis.

Surgery as a Ankylosing Spondylitis Treatment

Surgery may be performed if pain or joint damage is severe.

Surgery plays a very small part in the management of this condition. About 6% of people with AS need to have a hip replaced. This will successfully restore mobility and eliminate pain of the damaged joint. In rare cases surgery is used to restore a straighter posture of the spine and neck to people who have become severely stooped.

i) Sacroiliac Joint: There are certain simple tests, which may be positive if the SI joint is affected.

ii) Spine: Loss of spinal motion can be detected quite early in most cases. As mentioned before early diagnosis is important in order to start on the Ankylosing Spondylitis treatment program.

iii) Examination of peripheral joint movements: All the joints are measured for active and passive range of motion, done with the help of goniometer. Commonly involved joints are temporomandibular , hip, knee and shoulder.

iv) Lung Function Test: Early involvement of the costo-vertebral joints in the disease process makes careful spirometry and measurement of chest cage movement essential. Less than 5cm of chest expansion during inspiration in an adult is considered to be reduced.

v) Measurement of Postural Deformity: In this, loss of secondary spinal curve occurs, first the lumbar lordosis is lost and then the cervical lordosis and increase of thoracic curve develops. So the patients spine become rounded. It is advisable to make objective measurement of these. In physiotherapy department using spondylometer helps in measurement of postural deformity.

Regular physiotherapy is very essential in the management of a patient of AS and only physiotherapist is the person who can help the patient to fight with the disease.

Exercises for mobilization of joints:-

Maintaining the mobility of joints, by giving mobility exercises to particular joints, which are affected like, spine, hip, shoulder, thoracic cage are essential in Ankylosing Spondylitis Treatment. Maintenance of the mobility is very important and the basic aim is that all the joints are moved to their maximum limit and by this, we can delay the process of ankylosis.

Hydrotherapy, in real sense refers to the therapeutic use of water. The therapeutic effects of water in relation to Ankylosing Spondylitis Treatment-

Prevent and correct deformity by giving attention to posture:-

Endurance is a quality which develops in response to repetitive contraction. Endurance is improved by working muscles against light resistance and high repetition i.e for longer time.