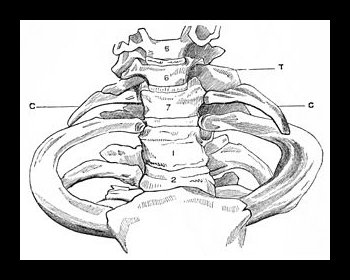 Cervical Rib refers to an abnormal protrussion in the cervical region which can either be due to abnormal enlargement of the transverse process of C7 vertebra or a small rib or fibrous band running from the 7th cervical vertebra to the first true rib or to the sternum but usually it is present posteriorly up-to a short distance.

It is usually diagnosed in middle age group persons though is present since birth. The cause is that by middle age, the shoulders start drooping which causes the cervical rib to get depressed and hence compressing the nerve root of the concerned region. This rib is usually asymptomatic but it may give rise to neurological symptoms if it exerts pressure on the subclavian artery or the brachial plexus like-

A cervical rib is a supernumerary (extra) rib which arises from the seventh cervical vertebra. It is a congenital abnormality located above the normal first rib. This rib is present in only about 1 in 200 (0.5%) of people; in even rarer cases, an individual may have not one but two cervical ribs. The presence of a cervical rib can cause a form of thoracic outlet syndrome due to compression of the brachial plexus or subclavian artery. Compression of the brachial plexus may be identified by weakness of the muscles around the muscles in the hand, near the base of the thumb. Compression of the subclavian artery is often diagnosed by finding a positive Adson's sign on examination, where the radial pulse in the arm is lost during abduction and external rotation of the shoulder.

There is often a tender supraclavicular lump which is bony hard and is fixed when palpated.

1- Mainly by X-ray to detect presence of Cervical ribs , which could be easily palpated.

Spurling's test is an orthopedic test used to diagnose nerve root compression primarily at the cervical level. It should not be used in instances in which vertebral instability is suspected.

Shoulder Abduction Test is an orthopedic test used to help diagnose a cervical nerve root injury or cervical disc herniation. It is performed by having the patient abduct their shoulder and place their hand on top of their head. A positive test will involve a decrease in radiculopathy or pain.

The differential diagnosis for Cervical Ribs is quite broad and includes neurologic, vascular, pulmonary, cardiac, and esophageal disorders.

Anti-inflammatory drugs and analgesics are provided as a conservative means of treatment.

surgery is essential in conditions of severe, progressive vascular and neurological signs and symptoms which are unbearable for the patients. It includes:

(a) Removal of extra segment.
(b) Dividing the scalene group of muscles.

On the basis of symptoms of the patient, the regime of physiotherapy is planned.