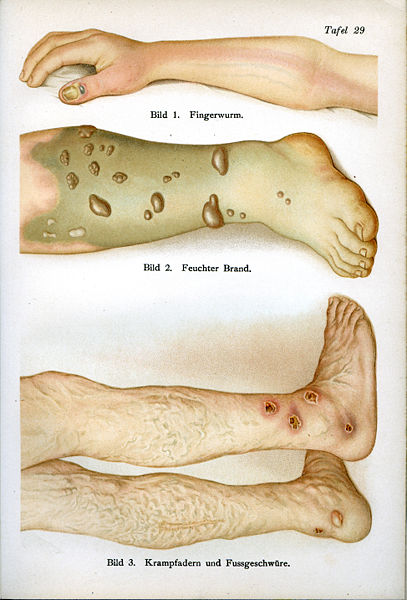 Varicose ulcers/Venous ulcers result from loss of epithelial cells causing exposure of the underlying tissue due to improper functioning of valves in the veins usually of the legs.

If the (i) Chronic venous congestion is decreased and (ii) The circulation, bringing oxygen and nutrition to the area is improved together with the removal of any infection and the mobilizing of the soft tissues, the ulcer heals with the formation of the scar tissue.

1-Floor of the ulcer may be-

3-Base of the ulcer may show-

4-Edema of the base of the ulcer and the foot and ankle to shoe line.

6-Decreased range of motion of the ankle and foot.

7-Muscle weakness and atrophy mainly of the calf muscles and loss of pumping action.

8-Push off missing in the gait.

Since physical therapist's role is limited to conservative treatment of skin ulcer, we here discuss only conservative management.

METHODS OF TREATMENT OF VARICOSE ULCER

Effleurage, slow deep kneading. Picking up wringing the thigh. Special attention to dorsum of foot, region of tendo-calcaneus and behind the malleoli (as in this area vascular supply is less). Thumb kneading over the tibialis anterior muscle.

The region of the ulcer is next treated with finger and thumb kneading to soften the induration, working inward from the periphery to the edge of the ulcer.

a) FOR INFECTED ULCERS- to destroy the micro-organism and increase the circulation to the area. Most commonly used is kromayer lamp and mercury vapour lamp.

To the base of the ulcer-E4 dose or E4x2 dose. Repeat 2-3 times per week until ulcer is clear of infection.

For edges of varicose ulcers when no infection then E1 or E0 dose to promote healing. Repeat daily.

b) FOR HEALING ULCER As ulcer heals,it grows inwards from the edge or outwards from the middle. UVR is given to promote granulation tissue formation.

For floor of the varicose ulcers E1 for shallow ulcer and E2 for deep ulcers. E1 and E0 to surrounding skin. E0 and E1 is repeated daily and E2 is given twice weekly.

These dosages can be given with cellophane filters which cut out the abiotic (UVC rays) and stimulate the growth of the granulation tissue.

c) FOR INDOLENT ULCERS UV rays are given to stimulate the circulation. Absorption of rays produces hyperemia in the congested area and produce an increased exudate.

E3 to the floor with edges screened. E1 or 2to the edges and surrounding skin. As varicose ulcer improves, base becomes pink and vascular E3 reduced and treatment for healing ulcer is given.

a) It promotes healing of the ulcer.
b) Soften the induration.
c) Increase vascularity in the surrounding tissue.

Ultrasound is contraindicated in infected ulcers or in DVT.

4-LASER THERAPY It increases vasodilation and increase the number of fibroblasts.

1Joule intensity at the margins and 2-4 J/cm square at the floor. Cluster probe can be used for varicose ulcers.

Return from varicose ulcers to home