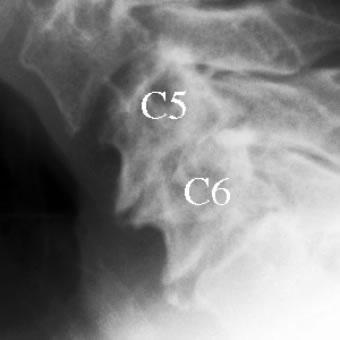 Cervical Osteoarthritis refers to the degenerative condition of the cervical spine including the intervertebral joints in between the vertebral bodies and the vertebral discs. The other terms used for this condition are

It is very common in persons above 50 years of age and those who have got to do work like typing or persons who have to keep the neck in one position as in reading, writing and other table works.

It starts with degeneration of disc resulting in, reduced space in between two vertebrae, later osteophytes are formed in the periphery. This is followed by involvement of the posterior intervertebral joints resulting in pain in the posterior part of the upper limb. Generally, this pain is along with tingling, numbness and radiating in nature.

The osteophytes formed may also compress the cord which will produce weakness of whole of the limb.

The segments commonly affected in the cervical region are C4 to T1. Along with these sites, other parts of spine are also affected due to compensatory adjustments.

1) Onset: The condition gets precipitated by fatigue, mental tensions, worries, anxiety or depression. It occurs gradually due to faulty posture.

2) Pain: The region of pain depends on the site where the cervical spine is affected by the pathology.
a) Upper cervical spine- Headache
b) Mid cervical spine- Neck pain
c) Region from C4 to T2- Radiating pain; pain in shoulder girdle, shoulder and arm, either unilateral or bilateral.

4) Sensation: There occurs paraesthesia that means, pins and needles or altered sensation of the particular dermatome which is supplied by the impinged nerve root.

6) Limitation of movement: All the neck movements get limited, often bilateral but is unilateral in case of acute onset of pain. The movement which gets very much limited is flexion of the upper cervical spine and extension of the lower cervical spine.

7) On palpation: It is detected that there is loss of mobility of soft tissues along with loss of movements of the accessory intervertebral structures.

8) Muscle spasm: There is spasm mostly of the scalene muscle usually unilaterally. As the middle and lower fibres of trapezius get lengthened and reduced in tone. Imbalance results causing the upper trapezius to bear increased tone and hence there occurs muscle spasm and muscle tightness.

9) Postural disturbance: The posture gets disturbed in cervical osteoarthritis as follows-

10) Cervical spondylosis is usually associated with headache, vertigo and loss of balance which is due to postural changes.

The only investigation which can easily confirm the diagnosis apart from the symptoms of the patient is radiograph. Early and proper diagnosis is necessary for Treatment Of Cervical Spondylosis/Cervical Osteoarthritis. The X-ray finding reveals that there is:

Heat is an effective mean of reducing and relieving pain in cervical osteoarthritis. The modalities that can be used are:-
a)Hot packs for moist heat.
b)SWD (pulsed or continous) for dry heat.

Once the pain subside to a tolerable limit, then exercises should be started and progressed gradually according to the conditions and requirements of the patient.

The basic technique of this exercise is that both Physiotherapist and patient exert equal pressure so that static; non dynamic action takes place in the cervical muscles. During all the movements, shoulder girdle should be stabilised so as to avoid trick movements. The pressure can be applied by the physiotherapist or by the patient himself after teaching him the technique properly.

Oscillatory traction is considered to be effective in mobilizing the stiff neck. Continuous traction is used to relieve nerve root pressure.

Traction is always given in comfortable position with minimum weight which should be graduated slowly as for the patient's recovery. This depends on the frequency of remissions and exacerbations of the condition. It can be given in sitting or lying position. The traction can be given either in the form of manual traction or positional traction.

Float support lying in warm water is best for total relaxation and hence gain relief of muscle spasm. To relax the upper fibres of trapezius, patient is taught to push one hand then the other towards the feet in the float support lying position.

For the lower fibres of trapezius and serratus anterior, sitting on the float with both hands holding down the float is the preferred position. This also stimulates the muscles and the receptors of the neck and shoulder joint to hold the head in a good position.

As the condition progresses, the abnormality of posture also increases, thus from the initial stage itself, postural awareness through proper advice and education should be planned and initiated by the physiotherapist.

The ideal posture is straight neck with chin tucked in and back straight with no compensatory actions or any trick movements. While sitting a high backed chair is provided to the patient with head, neck and shoulder supported; a small pillow in the lumbar spine, feet properly supported and arms resting on a pillow over the lap or on the arms of the chair.

While sleeping, side lying is the most preferred position, supine lying is also advised. A single pillow under head for head support is allowed. A Butterfly pillow is the best support for a patient of cervical osteoarthritis, as it is flattened in the middle where the head rests and the elevated ends support the head on the sides.

Support for the neck are of great importance to keep the neck steady and to relieve the pain. A firm neck collar is very beneficial especially during activities or during travelling. While patient is resting or sitting, the collar should be removed but then also the neck should be supported by pillows or head rest.

Due to pain and spasm of cervical muscle, patient is always in discomfort and uneasiness. So to alleviate these undesirable situations, relaxation techniques are taught in various positions that is during rest, work or play.

While lying on bed, patient is adviced to loosen his entire body and stretch for few times so as to reduce the muscular tension to a minimum. While relaxing the whole body should be fully supported by pillows. He is then encouraged to think of something pleasent which will facilitate comfortable and relaxed sleep.

Surgery may be necessary for a patient suffering from cervical osteoarthritis if he/she has severe pain that does not improve from other conservative treatments. It should be the last resort as there is always a risk factor involved.