In emphysema (from the Greek word for "inflation"), the walls of the alveoli (air sacs) in the lung are destroyed and lose elasticity (the ability to spring back to shape), hindering the outflow of air (from the sacs) when a person exhales. Disease Emphysema frequently occurs together with chronic bronchitis, and together these two diseases are called chronic obstructive pulmonary disease (COPD).

The most common cause is cigarette smoking. If you smoke, quitting can help prevent you from getting the disease. If you already have emphysema, not smoking might keep it from getting worse. Treatment is based on whether your symptoms are mild, moderate or severe. Treatments include inhalers, oxygen, medications and sometimes surgery to relieve symptoms and prevent complications.

Disease Emphysema is a respiratory condition in which millions of the lung's tiny air sacs (alveoli) stretch out of shape or rupture. As these thin, fragile air sacs become damaged or destroyed, the lungs lose their natural elasticity and are unable to empty easily. Pulmonary Emphysema is a progressive disease, which means it continues to get worse. As the condition progresses, the lungs also lose their ability to absorb oxygen and release carbon dioxide. Breathing becomes more difficult, and a person feels easily short of breath, like he or she is not getting enough air.

Smoking is responsible for up to 90% of cases of emphysema. Exposure to secondhand smoke and airborne toxins also can contribute to the disease emphysema, although these factors are much less important than smoking. Smokers exposed to high levels of air pollution, including sulfur dioxide and particulates, appear to be at higher risk of developing COPD.

About 1% of people in the United States develop emphysema from an inherited disease known as alpha 1-antitrypsin deficiency. In this genetic condition, the body doesn't make enough of a protein called alpha 1-antitrypsin (AAT), which protects the lungs from damage by enzymes. When levels of AAT are low, the lungs are prone to being damaged by these enzymes. In its most severe form, emphysema can develop in people in their 30s or 40s. Because smoking interferes with the function of AAT, people with AAT deficiency who smoke develop more severe emphysema at an earlier age than those who don't smoke. Most people with AAT deficiency are Caucasians of northern European descent.

The causes of disease emphysema include:

In underdeveloped countries, a common cause of emphysema is indoor air pollution. In these populations, it is very common to have indoor stoves in the kitchen. The smoke from cooking results in the damage to the lungs.

1) Centrilobular or Centriacinar This type of emphysema mainly affects the bronchioles. Alveoli are intact and upper lobes of lungs are mainly affected.

2) Pan-lobular or Pan-acinar In this type of Emphysema disease both alveoli and bronchioles are grossly affected. Mainly lower lobes of lungs are affected. 1st degree emphysema is generally Pan-acinar. 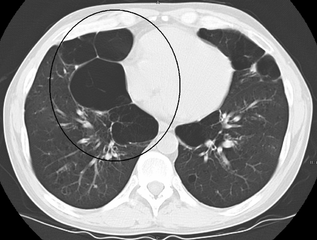 There are two polar groups of pattern for disease emphysema. They are as follows-

Blue Bloater: This is commonest of the two polar groups-

As the disease worsens, oxygen levels in the blood start to fall and carbon dioxide levels rise. The symptoms of disease emphysema vary considerably and may be confused with those of other conditions, so doctors rely on chest x-rays, CAT scans, and tests of lung function to make a definitive diagnosis. A key procedure is spirometry, which easily and inexpensively measures a person's ability to force air out of the lungs. Other laboratory tests are used to assess oxygen and carbon dioxide levels in the blood.

People with alpha-1 antitrypsin deficiency may be candidates for replacement therapy with infusions of natural AAT obtained from donors. While this form of treatment appears effective, it is time consuming and very expensive. Genetically engineered forms and an inhaled form are under development.

Doctors may prescribe a number of different medications to relieve the symptoms of chronic bronchitis that often accompanies emphysema. These may include:

Oxygen therapy has been proven to increase life expectancy in people with emphysema who have below-normal levels of oxygen in the blood. Oxygen usually is given through a plastic tube (nasal cannula) worn under the nostrils. The oxygen either is stored in metal cylinders, or is purified from air by an electrical machine (an oxygen concentrator). A number of lightweight, portable devices are now available that allow those who need oxygen to leave their homes for hours at a time. Some people with emphysema need oxygen only at night. Because supplying oxygen at home is very expensive, most medical insurance companies have strict requirements to qualify for home oxygen.

People with emphysema also are at risk of becoming malnourished, and developing psychological problems such as anxiety or depression. Therefore, it is important to see your doctor regularly about an appropriate diet, as well as counseling or medications to help with psychological issues.

A number of other treatments are available for people with advanced stages of emphysema.