The term Tennis Leg refers to an acute medial head of the gastrocnemius muscle tear in the older athlete characterized by sudden onset of severe calf pain and significant disability. The injury is invariably associated with extensive bruising and swelling, and can be mistaken for a deep venous thrombosis. The most common site is the medial head of gastrocnemius, but occasionally the plantaris muscle is involved. Symptoms are a sudden, sharp or burning pain in the leg, sometimes accompanied by an audible sound. In most cases, the player is unable to continue play because of the severe pain. Depending on the severity of the injury, recovery may take between a few days and six weeks.

This injury occurs commonly in sports activities (e.g, hill running, jumping, tennis), but it can occur in any activity. A medial calf injury is often seen in the intermittently active athlete. Medial calf injuries occur more commonly in men than in women, and these injuries usually afflict athletes and others in the fourth to sixth decade of life. Medial calf injuries are most commonly seen acutely, but up to 20% of affected patients report a prodrome of calf tightness several days before the injury, thus suggesting a potential chronic predisposition. 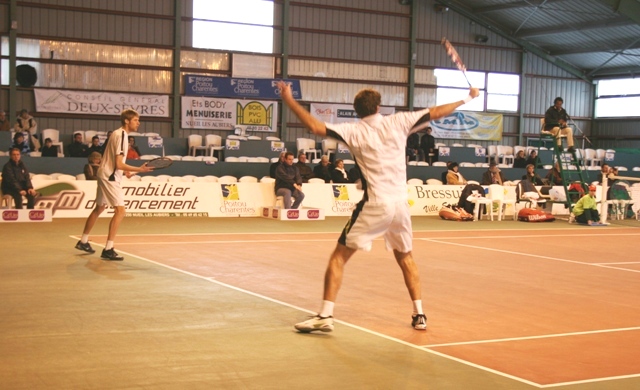 This condition has been termed "tennis leg" because of its prevalence in this particular sport, but medial calf injury can happen in a variety of sports or other activities. One mechanism that occurs is on the back leg during a lunging shot, in which the knee is extended while the foot is dorsiflexed. This action puts maximal tension on the gastrocnemius muscle as the lengthened muscle is contracted at the "push off," resulting in a tennis leg injury. This is the common position of the back leg in a tennis stroke, and it results in the greatest force to the muscle unit; but tennis leg injury can also occur during a typical contraction of ankle plantar flexion, especially if the athlete is pushing or lifting a large weight or force.

Signs and Symptoms for Tennis Leg

Acute Stage Rehabilitation The following action should be taken as quickly as possible, certainly within 48 hours.

Once the worst pain and swelling have subsided (after 1 to 2 days), start to build-up the training load. During this period, pain is a signal to rest. Do not to cross the pain threshold, as this will slow down the healing process. The training load is built up in three steps. These are described below, with several tips.

Pain management should include analgesics as indicated. Caution should be used with nonsteroidal anti-inflammatory drugs (NSAIDs) during the acute injury phase, as these agents can predispose the patient to increased bleeding and hematoma formation in the initial days after an injury. Theoretically, cyclooxygenase-2 (COX-2) inhibitors may provide pain control without the risk of bleeding in acute injuries, which is a concern with traditional NSAIDs.

Ankle/foot bracing should be used to keep the ankle in a position of maximal tolerable dorsiflexion. Studies have shown an increased rate of healing with this intervention.