Neonatal hyperekplexia is a rare autosomal dominant disorder with onset soon after birth, characterized by exaggerated startle response, rigidity and assumption of a flexed fetal position. Non-habituating symmetrical flexor spasm in response to light tapping of the nose is the clinical hallmark of this disorder. Commonly associated features include abnormal intrauterine fetal movements, feeding difficulties, nocturnal myoclonus, undue startle to loud noise or somato sensory stimulation, and hernias. Spasms may be severe enough to cause apnea, bradycardia and death.

During these rigid periods, some infants stop breathing, which, if prolonged, can be fatal. This condition may explain some cases of sudden infant death syndrome (SIDS), which is a major cause of unexplained death in babies younger than 1 year. Infants with hereditary startle syndrome have hypertonia at all times, except when they are sleeping. 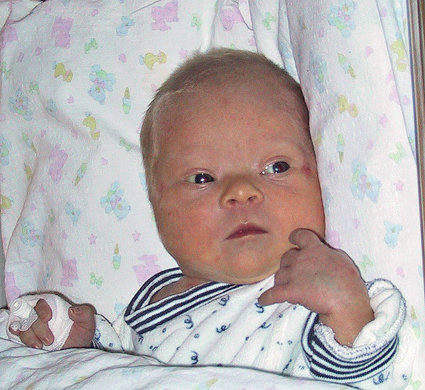 The signs and symptoms of hereditary startle syndrome typically fade by age 1. However, older individuals with this disease may still startle easily and have periods of rigidity, which can cause them to fall down. Some individuals with this condition have a low tolerance for crowded places and loud noises. Some affected people have persistent limb movements during sleep. Affected individuals who have epilepsy have the disorder throughout their lives.

At least five genes are associated with startle syndrome. Most of these genes provide instructions for producing proteins that are found in nerve cells (neurons). They play a role in how neurons respond to a molecule called glycine. This molecule acts as a neurotransmitter, which is a chemical messenger that transmits signals in the nervous system. Gene mutations that cause hereditary hyper-ekplexia disrupt normal cell signalling in the spinal cord and the part of the brain that is connected to the spinal cord (the brainstem).

This condition can be inherited in an autosomal dominant pattern, which means one copy of the altered gene in each cell is sufficient to cause the disorder. In some cases, an affected person inherits the mutation from one affected parent. Other cases may result from new mutations in the gene. These cases occur in people with no history of the disorder in their family.

Rarely, it is inherited in an X-linked pattern. In these cases, the gene associated with this condition is located on the X chromosome, which is one of the two sex chromosomes. In females (who have two X chromosomes), a mutation in one of the two copies of the gene in each cell is sufficient to cause the disorder. In males (who have only one X chromosome), a mutation in the only copy of the gene in each cell causes the disorder. A characteristic of X-linked inheritance is that fathers cannot pass X-linked traits to their sons.

The disorder was first described in 1958 by Kirstein and Silfverskiold, who reported a family with 'drop seizures'. In 1962 Drs. Kok and Bruyn reported an unidentified hereditary syndrome, initially started as hypertonia in infants. Genetic analysis within this large Dutch pedigree was later found to carry a mutation within the GLRA1 gene, which was the first gene implicated in hyperekplexia.

The most commonly effective treatment is clonazepam, which leads to the increased efficacy of another inhibitory neurotransmitter, GABA. Levetiracetam has been used to some success with an acquired case of startle syndrome. During attacks of hypertonia and apnea, the limbs and head may be flexed towards the trunk in order to dissipate the symptoms. This is named the Vigevano maneuver after the doctor who invented it.

Return from Hyperekplexia to Home Page