Floppy baby syndrome include infants with benign congenital hypotonia who typically exhibit the condition at 6 to 12 months old, with delayed gross motor skills. 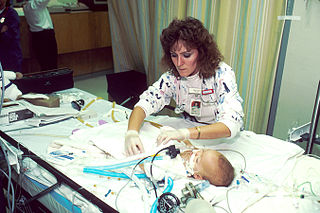 Muscle tone is defined as resistance to passive movement.

Hypotonia means "low tone," and refers to a physiological state in which a muscle has decreased tone, or tension.

The clinical distinction between upper and lower motor neuron disorders in infants is blurred because incomplete myelinization of the developing nervous system limits expression of many of the cardinal signs, such as spasticity. Neuromuscular and cerebral disorders may produce hypotonia in a young child or infant. The two critical clinical points are whether the child is weak and presence or absence of the deep tendon reflexes. Hypotonia and weakness coupled with depressed or absent reflexes suggest a neuromuscular disorder. A stronger child with brisk reflexes suggests an upper motor neuron source for the hypotonia.

Some infants who appear to move well when supine in their cribs are "floppy" when handled or moved. When placed on their backs, these infants are bright-eyed, have expressive faces, and can lift their arms and legs without apparent difficulty. When lifted, their heads flop, they "slip through" at the shoulders, do not stand upright on their legs, and form an "inverted U" in prone suspension (Landau posture). When placed prone as neonates, they may lie flat instead of having their arms and legs tucked underneath them. Passive tone is decreased, but reflexes are normal. This clinical picture may be associated with significant cerebral disease or may be a benign phenomenon that is outgrown.

Infants who have a connective tissue disorder, such as Ehlers-Danlos syndrome, Marfan syndrome, or familial laxity of the ligaments, may exhibit marked passive hypotonia, "double jointedness," and increased skin elasticity. They have normal strength and cognition and achieve motor and mental milestones normally. They have peculiar postures of their feet or an unusual gait.

Infants with benign congenital hypotonia typically exhibit the condition at 6 to 12 months old, with delayed gross motor skills. They are unable to sit, creep, or crawl, but have good verbal, social, and manipulative skills and an intelligent appearance. Strength appears normal, and the infants can kick arms and legs briskly and bring their toes to their mouths. The children display head lag, slip-through in ventral suspension, and floppiness of passive tone. Parents may remember that the infant has seemed floppy from birth. The differential diagnosis includes upper and motor neuron disorders and connective tissue diseases.

Table . Approach to Differential Diagnosis of the Floppy baby syndrome

Depending on clinical situation, may be delayed until around 6 months of age as neonatal results are difficult to interpret

Physiotherapy for floppy infants is aimed at stimulating normal movement, co-ordination and strength through use of play and functional activities. This makes it more fun for children, more meaningful in terms of everyday activity, and reproducible at home and school. It should encourage as much involvement from parents and carers as possible in their child’s rehabilitation, in order for them to feel very much part of the process. It should be able to give parents specific activities that will help to develop their child’s skills and movement control, and taylor rehabilitation to the needs of individual children.

Some physiotherapy techniques also involve a very hands-on approach in order to change soft tissue length and tension, and facilitate normal movement patterns. Specific stretches, massage techiques and correct handling can be taught to parents in order that the treatment outcome is the most effective it can be.

Physiotherapy can also work along side other Paediatric Health Professionals such as Midwives, Occupational Therpaists and Speech Therapists.