Iliotibial Band Friction Syndrome is an overuse problem that results from inflammation and irritation of the distal portion of the iliotibial tendon as it rubs against the lateral femoral condyle.

What Is Iliotibial Band Friction Syndrome ?

The iliotibial band is a non elastic collagen cord stretching from the pelvis to below the knee. At the top it is attached to the iliac crest where it blends with gluteus maximus and TFL.

As the tract descends the lateral side of thigh its fibres attach to the linea aspera of the femur.The superficial fibres continue downwards to attach to the lateral femoral condyle, lateral patellar retinaculum and anterolateral aspect of the tibial condyle.

In standing, the itb lies posterior to hip axis and anterior to knee axis and therefore help to maintain hip and knee extension, reducing the muscle work required to sustain an upright stance. As the knee flexes to 30 degree, the itb passes posterior to knee joint axis and in doing so it glides over the lateral femoral condyle. 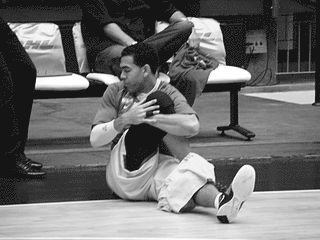 When the tendon passes the knee (lateral femoral condyle) there is a bursa sac between the bone and the tendon.This tendon moves over a bony bump at the outer knee as it passes in front and behind it.The bursa functions like a water balloon to reduce friction.In IT Band Friction Syndrome, overuse causes excessive friction at this bump, resulting pain and inflammation of the bursa (bursitis),tendon (tendinitis)or both.

IT Band Friction Syndrome is caused by excessive friction of the iliotibial band and the underlying bursa due to repetitive knee bending activities. This is an overuse injury, although direct trauma to the outer knee may cause the bursa to get inflamed.

Factors that contribute to the development of Iliotibial Band Friction Syndrome-

The Affected side abducts. It indicates tight ITB. Known as 'J' sign.

Greater stretch is placed on ITB when the knee is extended

Put the patient in a supine position. Next bring the affected knee up to a 90 degree knee flexion and apply pressure with your thumb to the lateral femoral epicondyle. The leg is then extended slowly. When it is extended to approximately 30 degrees, the iliotibial band translates anteriorly over the lateral femoral epicondyle under the examiners thumb.

If the patient indicates pain at this 30 degree angle, which is similar to when the patient is active, the test is considered positive and it suggests the presence of iliotibial band syndrome.

1-The initial inflammation responds to anti-inflammatory medications and rest from flexion-extension activity of the knee.

7-When limited range of motion is identified it band stretch is given.

10-Use lateral wedge in the shoes, for patients with it band tightness.

11-If the patient does not respond then steroid injection can be given. Surgery to remove the inflamed bursa or inflamed iliotibial band is considered usually after at least 6-12 months of conservative treatment.

What Other Visitors Have Said

Click below to see contributions from other visitors to this page...